During the webinar, we received many audience questions regarding SSAI, OTT/CTV advertising, Pixalate’s MRC Accreditation(s), and Pixalate’s overall SSAI and SIVT detection detection solutions. You can watch the webinar recording here.

This post answers some of the key questions from your industry peers, with questions edited for clarity and/or brevity:

Do the Pixalate SSAI metrics rely on “transparent” SSAI? 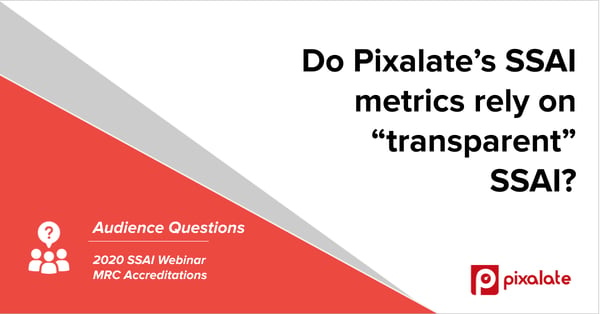 No. While Pixalate’s designation of SSAI traffic as ‘transparent’ may be contingent on additional X-Device HTTP header values being passed via VAST 4.1+, Pixalate’s SSAI measurement metrics leverage our proprietary, patent-pending systems and methods that are not contingent on such values to be passed.

Additionally, it should be noted that Pixalate’s SIVT detection does not rely upon designations of traffic as SSAI or Transparent SSAI. Although such designations do not dictate Pixalate’s IVT opinions, from an industry best-practices perspective, Pixalate strongly encourages the appropriate parties to leverage the additional X-Device HTTP Headers (available via VAST 4.1+ Frameworks) within their respective digital supply chains.

Within Pixalate’s OTT/CTV solution for invalid traffic (IVT), are the SSAI metrics delivered in reporting? 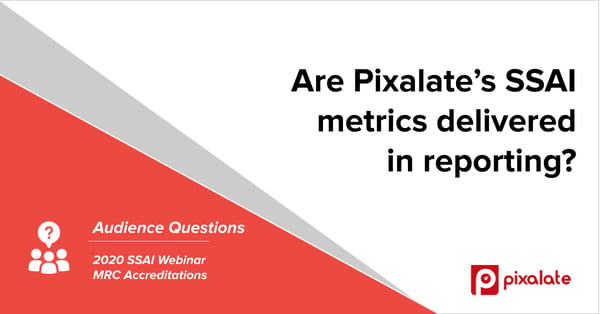 While SSAI is currently most commonly used in OTT/CTV, there are several video and video ad content providers that are seeking to employ SSAI techniques across most (if not all) video or ad content delivery channels, including desktop, mobile web, mobile in-app, and OTT/CTV. Pixalate’s SSAI Measurement Metrics are applicable to all of these channels.

Does Pixalate have active pre-bid filters for CTV on major industry DSPs?

Additionally, clients can generate their own exclusion lists via Pixalate’s MRT, which is user-configurable based on risk aversion (e.g., on the basis of IVT, brand safety, viewability, etc.). Pixalate’s pre-bid blocking solutions can typically be applied with any platform/DSP/SSP that allows secure FTP uploads.

Pixalate’s pre-bid blocking solutions — as well as our self-service exclusion list capabilities via the MRT — are refreshed frequently, at committed periodic cadences. To ensure optimization of Pixalate’s pre-bid solutions, it is recommended such data feeds are obtained via secure FTP and applied in accordance with the respective update cadences.

XFF headers are not enough, as a botnet can easily spoof the headers. What about adding an additional layer of transparent reporting, such as through an SSAI vendor with the ability to send beacons from the end-users device?

Pixalate has a multi-pronged approach as it relates to determining IVT (specifically, SIVT) leveraging SSAI integrations.

All HTTP header values are processed to determine the level of confidence associated with any designation of an integration as SSAI. Pixalate’s designation of purported SSAI traffic as SIVT is agnostic as to whether the user or client IP address detected is passed directly via XFF or X-Device HTTP Headers (e.g. X-Device-IP or X-Device-UA).

Additional insights, such as those passed via additional HTTP Header values via VAST 4.0/4.1+, may be factored into consideration as part of Pixalate’s overall proprietary SSAI measurement and SSAI IVT detection. However, such data points are not determinative with respect to Pixalate’s IVT opinions.

While there are several SSAI vendors that offer the ability to send beacons from the end-user’s device to the respective serving/measurement services, the most common means of sending such additional data points is via IAB Tech Lab’s VAST Framework, particularly VAST 4.1+ (VAST 4.2 - June 2019). You can read more about industry standards for SSAI in OTT/CTV in our blog post.

Additionally, as client-side HTTP Header values are particularly susceptible to spoofing within SSAI integrations, this is taken into consideration as a part of Pixalate’s overall SSAI measurement/reporting approach and SSAI IVT detection solutions. Pixalate’s 12 unique SSAI measurement metrics are designed to provide an additional layer of transparency, especially within OTT/CTV channels.

How does Pixalate calculate the IVT rate in OTT/CTV? 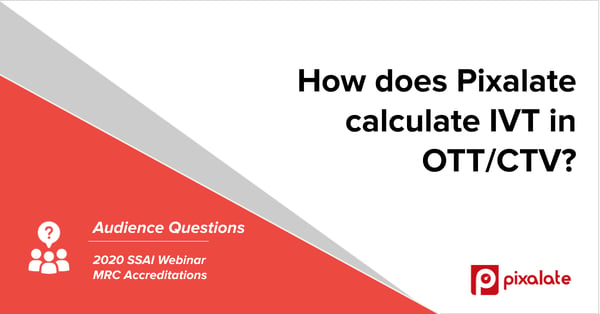 Pixalate’s published IVT rate for OTT/CTV channels is based on Pixalate’s datasets, which are predominantly made up of open auction programmatic traffic sources. Such IVT (particularly, SIVT) rates would not be expected to be as high in a premium, closed-buy inventory channel.

About 22% of all programmatic OTT/CTV is invalid, according to Pixalate’s data.

When SSAI is used (within programmatic OTT/CTV inventory across predominantly open-auction channels), the invalid traffic rate climbs to 28%, according to Pixalate’s data.

How prevalent is IP Obfuscation in the overall OTT/CTV IVT?

In general, Pixalate has identified scenarios in which IP Obfuscation techniques are deployed from malicious SSAI proxies in order to make their traffic appear as legitimate SSAI traffic corresponding to a large number of users (from different IPs). Although this is not the most common technique used, there are still some sources of such activity in the ecosystem.

It is also important to note here that incorrect SSAI proxy implementations can interfere with the measurement pixels of various measurement vendors and cause IP Obfuscation to appear.

This type of activity is separately reported by Pixalate and analyzed at the vendor level in order to provide guidance toward a more standardized implementation of SSAI and enable SSAI proxy vendors to properly handle HTTP requests without interfering with the measurement process.

Pixalate offers a whitelisting form to clients which is accessible within our Customer Support Portal. If deemed appropriate, Pixalate is typically able to assess and whitelist certain IPs or IP ranges.

It is important to note, however, that Pixalate assesses client-submitted proxy server IP addresses/IP address ranges at the point of submission, reassesses such SSAI proxy IPs autonomously via Pixalate’s post-bid Analytics reporting platform, and are still evaluated on the basis of Pixalate’s 40+ reported IVT types. Additionally, Pixalate’s Proxy Server Reputation System is intended to obviate the need to whitelist in many instances.

Want to learn more about SSAI and ad fraud in OTT/CTV?

Want to learn more about Pixalate’s products and services? Schedule a demo with Pixalate today!

Although grounded in Pixalate’s proprietary technology and analytics (which Pixalate evaluates and updates continuously), discussions regarding, among other topics, invalid traffic (IVT) levels by device and ad type, and sophisticated invalid traffic (SIVT) detection in the context of purported server-side ad insertion (SSAI) for OTT/CTV, as set forth in this blog post, represent Pixalate’s opinions (i.e., they are neither facts nor guarantees). Such Pixalate IVT opinions are derived from Pixalate datasets, which consist predominantly of open auction programmatic traffic sources.

Per the MRC, the term “'Fraud' is not intended to represent fraud as defined in various laws, statutes and ordinances or as conventionally used in U.S. Court or other legal proceedings, but rather a custom definition strictly for advertising measurement purposes;” and also per the MRC, “'Invalid Traffic' is defined generally as traffic that does not meet certain ad serving quality or completeness criteria, or otherwise does not represent legitimate ad traffic that should be included in measurement counts. Among the reasons why ad traffic may be deemed invalid is it is a result of non-human traffic (spiders, bots, etc.), or activity designed to produce fraudulent traffic.”