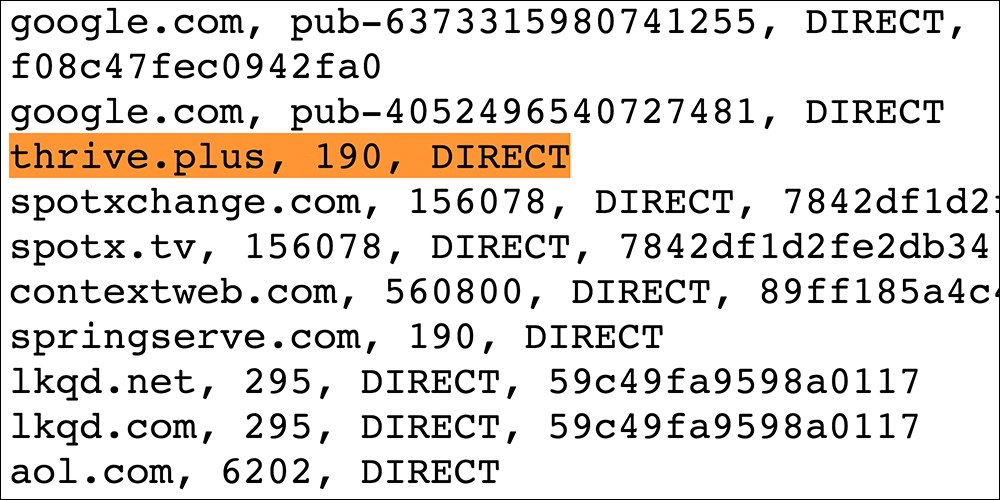 Buyers are asking to be added to ads.txt files, and some publishers are doing it

According to a report in AdExchanger, "Publishers are being deluged with emails from 'agencies' and 'digital marketing solutions' companies threatening to stop buying inventory unless they’re added to the Ads.txt file."

"The New York Times, Wenner Media, Intermarkets and LittleThings all confirmed to AdExchanger they had received emails from partners angling to become part of the publishers’ Ads.txt files," wrote AdExchanger. "But the publishers have the leverage. It’s the buyers who are at risk because if they aren’t added to Ads.txt, they can’t resell the publisher’s inventory. If that’s their only business model, they’re in trouble."

According to AdExchanger, Thrive+ is one of the companies asking to be added to ads.txt files. Download the list of sites that have updated their ads.txt files as a result of Thrive+'s request:

An example of Thrive+ in an ads.txt file 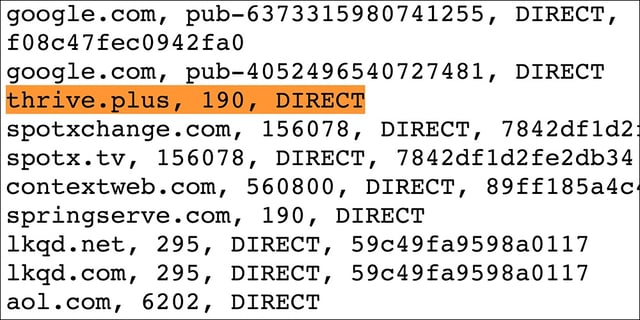 A recent Reddit r/AdOps thread started by someone who works at a "national publishing company" questioned a request from Thrive+ to be added to said publisher's ads.txt file. Others said they received the same email.

The concern, as AdExchanger noted, is that this can be a sign of potential arbitrage. Several commenters in the Reddit thread shared similar concerns. Thrive+ told AdExchanger it does not practice display-to-video arbitrage.

Who has added Thrive+ to their ads.txt files?

Pixalate scanned all ads.txt files to see which publishers have added Thrive+ to their ads.txt files (listed as thrive.plus on the file). To see the full list, download it here. (Updated as of November 2, 2017.)

As of November 2, 2017, thrive.plus has been listed as a direct partner by 19 publishers on their ads.txt files, and as a reseller by 51 publishers.