Digital ad spend and fraud are both rising: Here's what the industry is doing about it

eMarketer recently broke the news that digital spend will soon surpass ad spend in traditional media channels. Mobile and video are the key drivers of growth. Unfortunately, that’s where fraudsters are the most active. They like to follow the money and always seek to make the most money through the path of least resistance.

These are some pretty major challenges - accounting for about $19B in fraudulent ad spend in 2018 - but there are some significant ways those challenges are being met. Both Pixalate and the industry at large are finding ways to combat these issues in 2019. One widely adopted solution rolled out by the Interactive Advertising Bureau (IAB) is ads.txt.

The IAB Tech Lab’s ads.txt program aims to reduce counterfeit inventory (e.g. domain spoofing), which is one specific type of invalid traffic (IVT), as we wrote about at the end of the year. 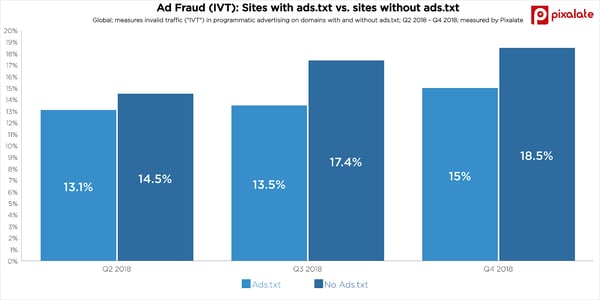 The program is a step in the right direction, and one that has been improving over time. Pixalate’s Q2 2018 study found that sites with ads.txt had a 10% lower ad fraud rate compared to those without. That same study one quarter later, in Q3 2018, found that 22% of domains with ads.txt had lower ad fraud rates compared to those without. Recent data around ads.txt shows a similar story, with sites using ads.txt experiencing about 19% less ad fraud than sites without, so the results are fairly steady.

App-ads.txt will help some key challenges faced by mobile and video

A separate solution was needed for mobile in-app and Connected TV/OTT and the IAB delivered, launching app-ads.text. The solution borrows from the concept behind ads.txt, encouraging content owners to declare their authorized digital sellers.

Pixalate is in full support of this extension into mobile-app and Connected TV/OTT because Invalid Traffic (IVT) can happen anywhere and, as we saw with desktop/mobile web, ads.txt can improve ad fraud rates. We hope to see the same with app-ads.txt and will be tracking the progress of this initiative as well.

Yet, despite industry efforts, we’ve seen that ad fraud rates are still on the rise. Even on desktop and mobile websites with ads.txt, Pixalate data still found about 15% ad fraud rates in Q4. Techniques to combat ad fraud ultimately will need to keep pace with ad fraud’s rapid growth. Industry-wide cooperation, paired with a comprehensive cross-channel solution are needed to eradicate fraud.

Pixalate protects against ad fraud across all devices, including mobile app and Connected TV/OTT

Invalid Traffic is an industry problem and it’s projected that it will cost advertisers $44 billion by 2022. Pixalate’s solutions can help combat this. Pixalate offers the only system of coordinated solutions across desktop, mobile web, mobile in-app, and OTT for better detection, diagnosis, and elimination of ad fraud.

Pixalate is also the only company to receive 17 total MRC accredited metric areas, including Sophisticated Invalid Traffic (SIVT) detection and filtration for Connected TV/over-the-top (OTT) video ad impressions. Ad fraud has largely flown under the radar in OTT channels, perpetuated by the myth that ad fraud does not exist in OTT even though global OTT ad fraud rates are at 19% and rising. Pixalate exclusively prevents ad fraud in Connected TV/OTT with two pre-bid blocklists.

Pixalate is committed to the fight against ad fraud across all devices — including CTV/OTT. Our solutions offer platform-wide protection and help advertisers increase ROI by eliminating ad fraud.

Schedule a demo today to see how Pixalate’s solutions can help your business safely grow in CTV/OTT.