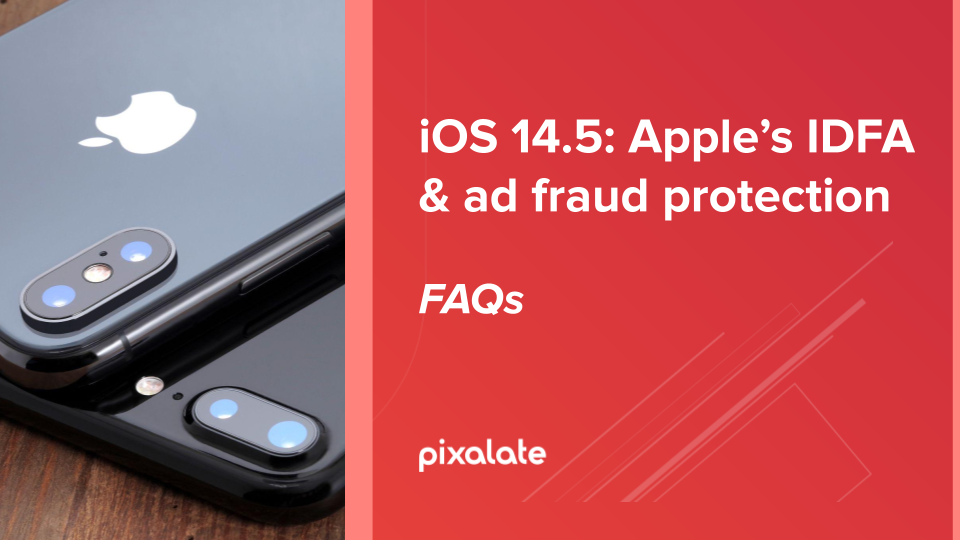 Apple has released iOS 14.5, making IDFA opt-in only. According to Apple:

With the upcoming public release of iOS 14.5, iPadOS 14.5, and tvOS 14.5, all apps must use the AppTrackingTransparency framework to request the user’s permission to track them or to access their device's advertising identifier. Unless you receive permission from the user to enable tracking, the device's advertising identifier value will be all zeros and you may not track them.

What does this change mean for invalid traffic (IVT) detection and prevention? In this blog, Pixalate goes through some of the most frequently asked questions about ad fraud protection and the IDFA change.

What changes for IDFA with the release of iOS 14.5?

With Apple's iOS 14.5, the advertising identifier that has been widely used for years will stop providing user identification as pervasively because it is now expected to be enabled for less than 38% of iOS users according to a recent “Apple IDFA Survey” as reported in Forbes.

How is Pixalate affected by such a change?

Pixalate utilizes IDFA as one of its means to identify devices and support blocking capabilities for the devices that have been deemed to be associated with large volumes of invalid traffic (IVT).

For the last three years, has been investing in its patent-pending technology that can capture granular information in regards to a device’s IPv6 (in addition to its IPv4) address, which may be used similarly to IDFA for relatively persistent identification.

Is IPv6 adoption large enough to act as a device identifier? 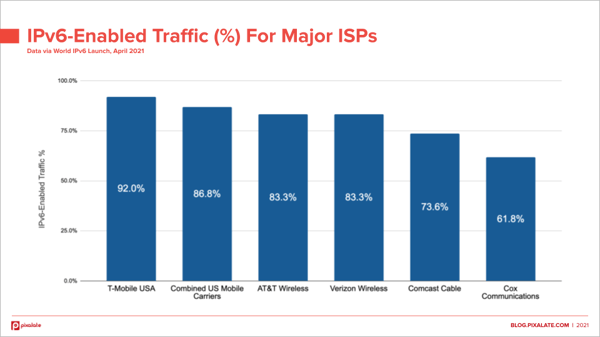 Yes, IPv6 adoption continues to increase every day, with most of the major ISPs (residential and mobile) being able to support both IPv4 and IPv6 at the same time for more than +85% of their IP addresses. This is also visible in the graph above for the biggest ISPs in the U.S. The same applies to many countries globally, and the number is expected to increase over time until we fully transition to IPv6.

What exactly is IPv6?

In layperson’s terms, IPv6 is a new addressing format planned to ultimately replace the older IPv4 format. (In actuality, IPv6 is a networking protocol that does much more than simply identify end-hosts, but, for our purposes here, we only care about the address format.)

One of the main reasons IPv6 was proposed more than 20 years ago is to solve the problem of IPv4 address exhaustion, because IPv4 is able to support approximately 3.7 billion IPs (excluding the reserved ones from a total of 2^32 = 4.2 billion IPs) using the 32 bits available to represent an address, and this couldn’t cover all the connected devices in the world.

Are there other alternative device identifiers?

Pixalate has been working on providing different methods for alternative ID capture.  Our key-value pair (KV) parameters can capture alternative IDs in our tags, such as an SDK user ID and identifier for vendor (IDFV), when available.