The iPhone X was officially released on November 3, 2017. Nearly three months later, about 5% of iPhone users are on Apple’s highest-end smartphone, according to recent research from Pixalate.

This research comes as new reports surface indicating that Apple may nix the iPhone X in 2018. (A report which is up for debate.)

When looking at just the iOS ecosystem, iPhone X has seen steady growth in its first three months of existence. According to Pixalate's research, the device went from having no iOS device market share when it launched (obviously) to about 5% of the U.S. iOS market share within three months. 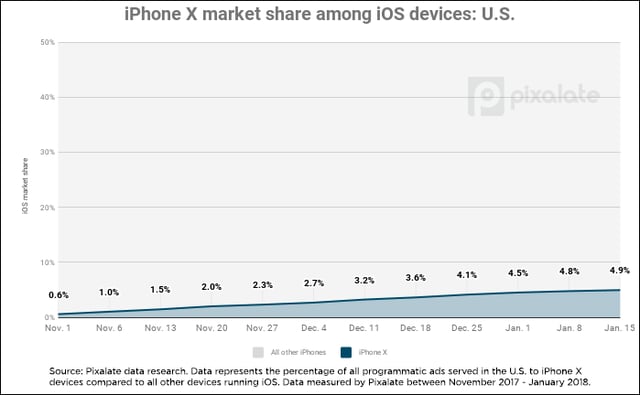 About 1-in-20 Apple smartphone users are sporting the iPhone X today, per Pixalate's research. That figure has seen steady week-over-week growth since launch, although the growth did taper off in mid-January after the holiday rush.

Here is a chart depicting the iPhone X iOS market share growth week-over-week since launch (in the U.S.). 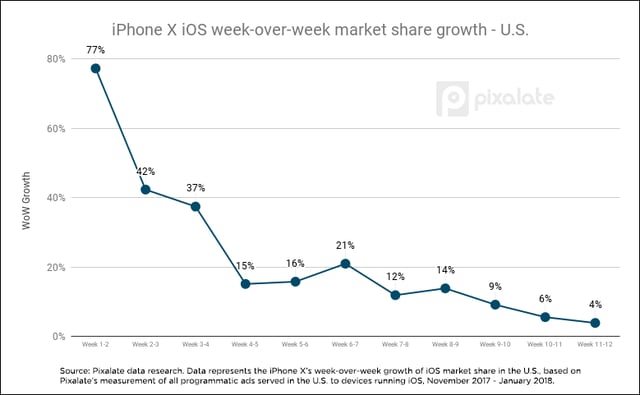 What is the above chart showing?

This chart depicts the week-over-week market share growth of the iPhone X within the United States among all iOS devices.

What are the takeaways?

It’s no surprise to see the largest market share growth figures happen when the device first launched. Since it’s growing from nothing, the percentages are bound to be larger at the beginning.

But the fact that the iPhone X has fallen to the low single digits in terms of market share growth week-over-week indicates that the device might not rise too much higher in terms of overall market share (which currently sits just below 5%). 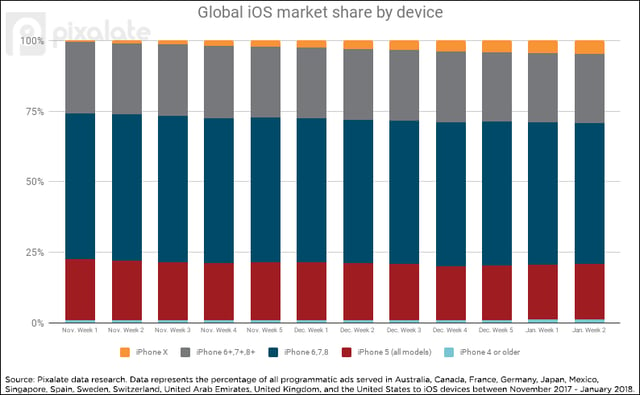 Above is a chart depicting the iPhone X’s week-over-week global* market share (*based on the 13 countries studied — see methodology below) compared to all other iPhone models.

According to Pixalate's latest data, the iPhone X accounted for about 4.6% of the global iOS market share — slightly under the U.S. figure of 5%.

Key takeaway: iPhone X growth is primarily coming at the expense of all iPhone 5 models and the combination of iPhone 6, 7, and 8 models, according to Pixalate's data. 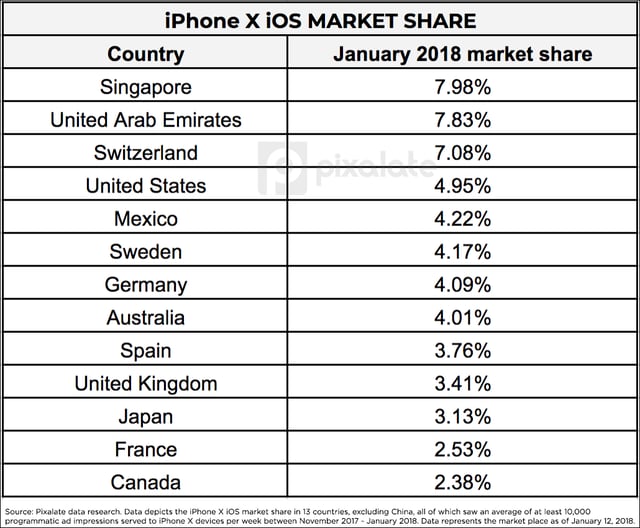 Pixalate’s data reveals that, of the countries studied, the iPhone X is most popular in Singapore and the United Arab Emirates, at just under 8% of the iOS market share in those countries.