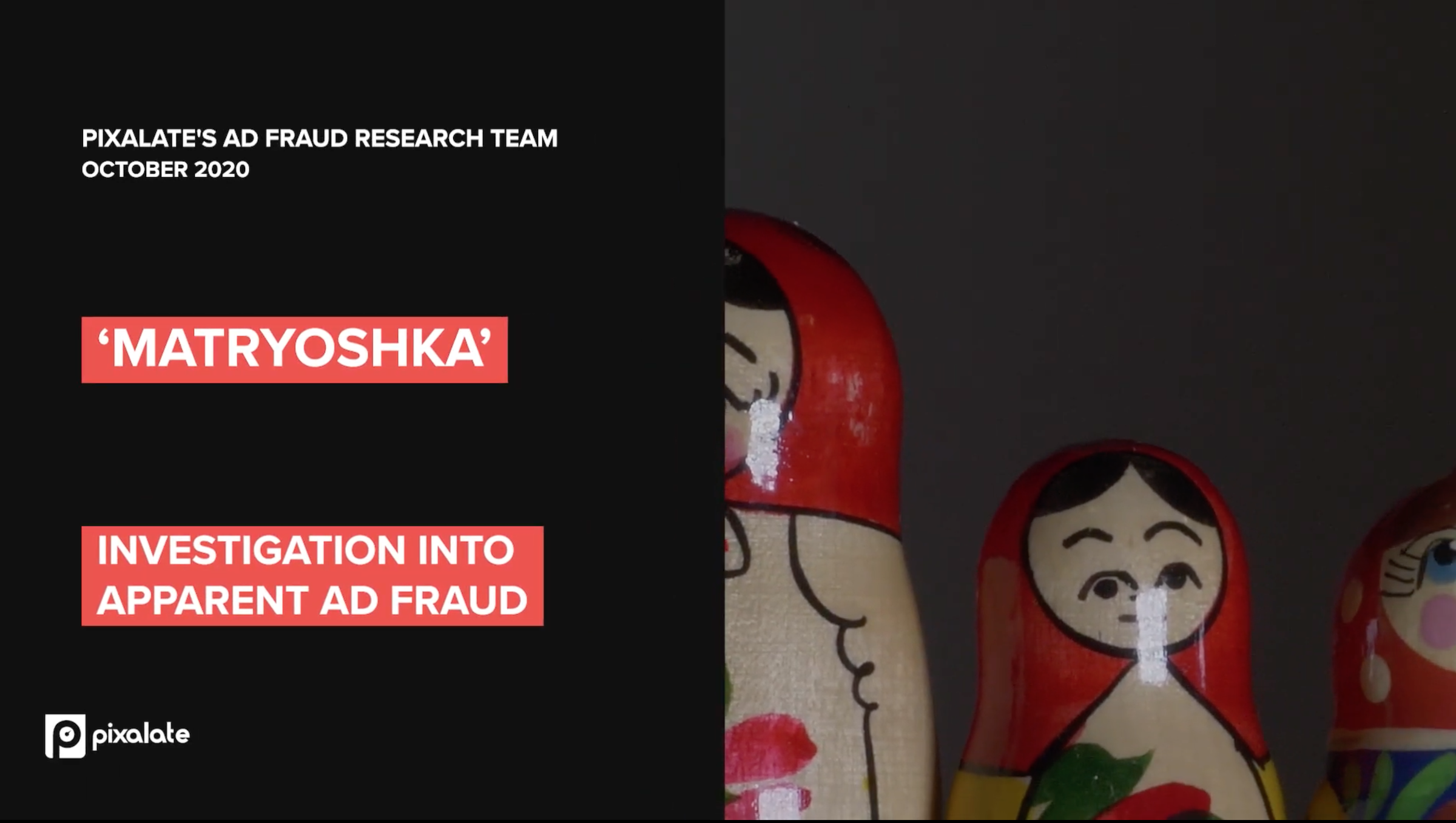 Pixalate is publishing its findings relating to the ‘Matryoshka’ ad fraud scheme utilizing the iFunny app on both iOS and Android devices, with slightly different methodologies on each device type.

This scheme has impacted at least two million iOS and Android users, with well in excess of $10 million siphoned from advertisers in 2020, according to Pixalate’s estimates.

The scheme, which Pixalate began tracking in 2019 and was active into at least October 2020, makes unauthorized use of – and misappropriates – consumers’ personal information.

Because most of the ad fraud discoveries published in the advertising industry address schemes specific to Android, this post will focus primarily on the iOS branch of the scheme, with a section at the end dedicated to the Android branch. We have included the malicious scripts used on both iOS and Android. In addition to surfacing an ad fraud scheme impacting iOS users, Pixalate also believes this scheme highlights a significant consumer privacy vulnerability.

Among Pixalate’s key observations of the apparent ad fraud scheme:

Here is a video showing the scheme in action:

Here’s how the scheme works on iOS:

On Android, the scheme is substantially similar but the implementation is slightly different (see below for details). 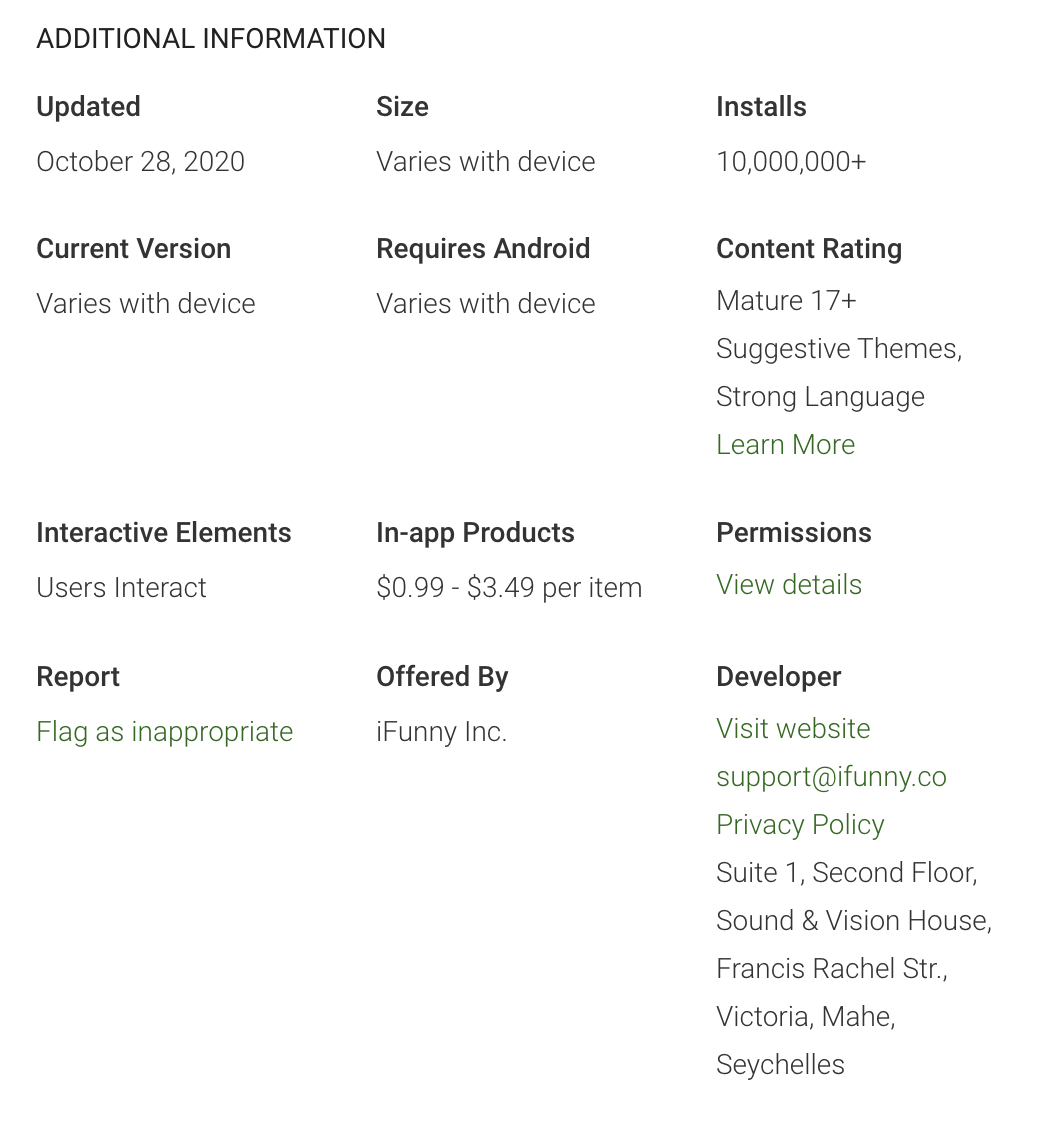 iFunny, which is registered in Seychelles but is purportedly Russian-owned, is a popular meme app with over 10 million Google Play Store downloads and is a top-50 Entertainment app on the Apple App Store.

Based on Pixalate’s research and diligence to date, this specific ad fraud scheme appears to be utilizing the iFunny app on both iOS and Android devices.

How the ad fraud scheme makes unauthorized use of consumer data

The consumer data utilized by the fraudsters as part of the scheme includes:

Importantly, Pixalate observed the as-yet-unidentified scammers capture and transfer these consumer data points to fraudster-designated endpoints. The screenshot below, taken in June 2020 on iOS, shows where the scammers log sensitive consumer data (latitude and longitude) to a third-party resource.

Capture of the malicious script on iOS from June 2020. Pixalate has blurred potentially sensitive information. Captured from the ad.js script

For California consumers affected by this scheme, the logging of personal information “for a purpose that the consumer would not reasonably expect,” and without the consumers’ authorization, appears to violate California Consumer Privacy Regulations, which became effective on August 14, 2020 (“CCPA Regulations”), including § 999.305(a)(1), § 999.305(a)(4) and § 999.305(b)(2).

The next screenshots shows latitude and longitude, IP address, and device ID shipped and stored on a fraudster-designated endpoint. As noted above, with respect to California consumers impacted by this scheme, the unauthorized transmission of such consumers’ personal information appears violative of the CCPA.

Captured from the ad.js script

One documented unauthorized use of the consumer data is to blend it with spoofed elements as part of the ad fraud scheme. Below is a screenshot of an app (Angry Birds 2) being spoofed as part of this scheme, with real consumer data (latitude and longitude, device ID, and IP address) blended in.

Other unauthorized uses – or sales – of the data cannot and should not be ruled out.

After analyzing more than 1.75B impressions generated by iFunny devices in the U.S. in Q3 2020, Pixalate identified which states were disproportionately impacted by the scheme. In the table below, we show the top 10 states based on the ratio (“Impact Ratio”) of the share of voice (i.e. impression distribution) of spoofed vs. real iFunny impressions by U.S. state, among states accounting for at least 1% of iFunny’s valid traffic.* For example, the contribution of Pennsylvania to the spoofing was 3x larger than the contribution of Pennsylvania to the real iFunny traffic, etc.

The most likely reason battleground states including Pennsylvania, Michigan, and Wisconsin were highly impacted is because, typically, scammers behind ad fraud schemes seek to make the most money possible while avoiding detection, and these states experienced a lot of advertiser demand leading up to the election.

The code behind the ‘Matryoshka’ ad fraud scheme

Now we’ll dive into the code running behind the scenes when the scammers carry out the attack. Here are the primary scripts utilized by the fraudsters:

The below steps detail the scheme on iOS: 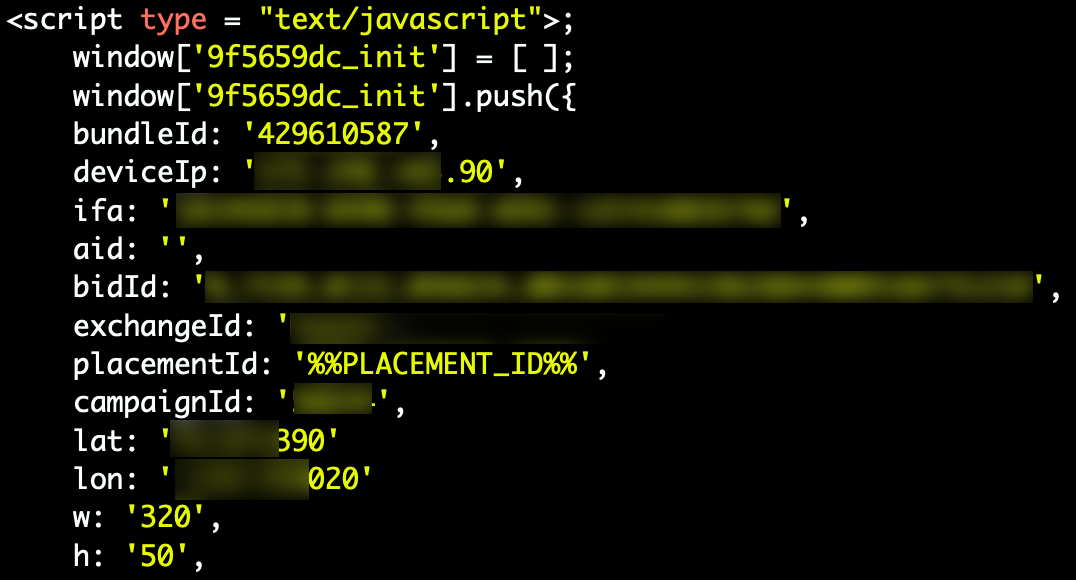 Capture of the malicious script on iOS from June 2020. Pixalate has blurred potentially sensitive information. Captured from the ad.js script

Captured from the ad.js script

As noted previously, with respect to California consumers affected by the scheme, unauthorized transfer of such consumers’ personal information to fraudster-designated endpoints to be used in video ad spoofing – and perhaps for other unknown purposes – may violate CCPA Regulations.

Diagram breakdown of the scheme on iOS and Android

Below are high-level technical overviews of each step of the ad fraud scheme on iOS and Android. 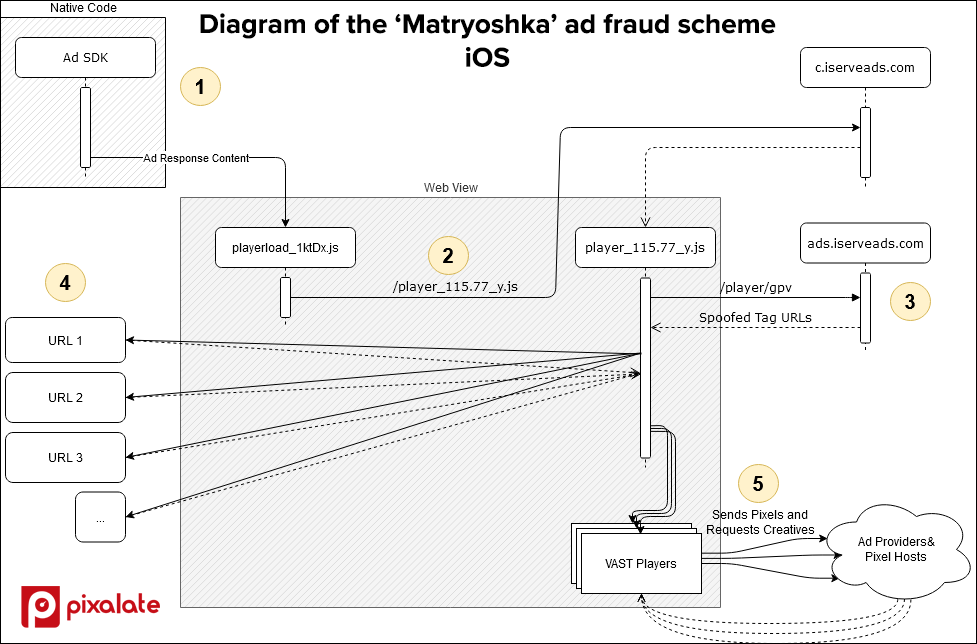 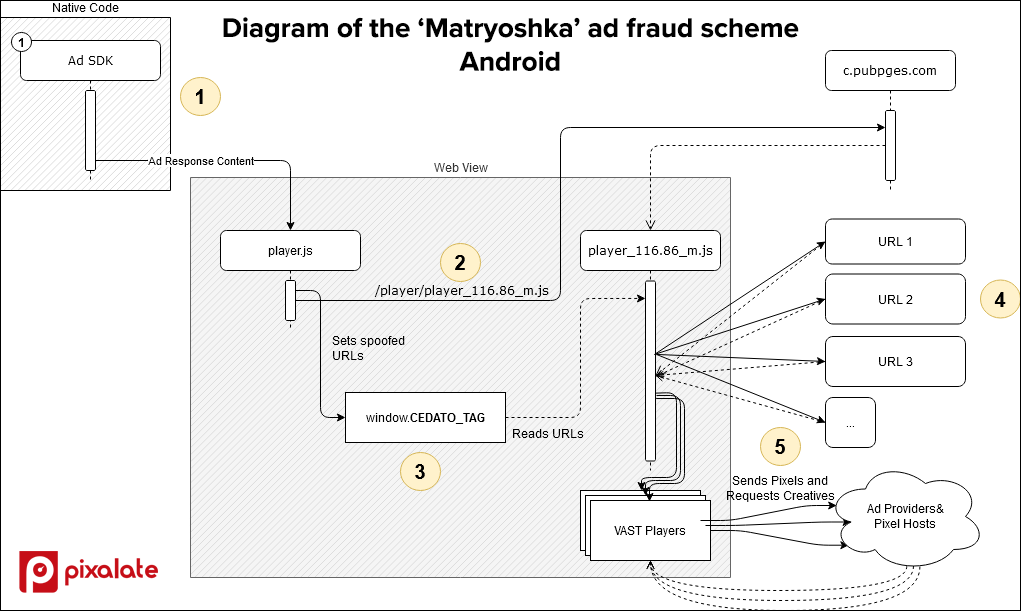 Below is one of the spoofed VAST tags from the Android branch of the scheme, captured by Pixalate’s research team. In the below example, we see Daily Themed Crossword being spoofed, with spoofed elements blended in with real consumer data.

The apps spoofed most often in the ‘Matryoshka’ scheme

In the above example, we see Angry Birds 2 spoofed, but that is just one of several thousand apps that were spoofed as part of this scheme. Here are the top 10 apps spoofed on iOS and Android, respectively: 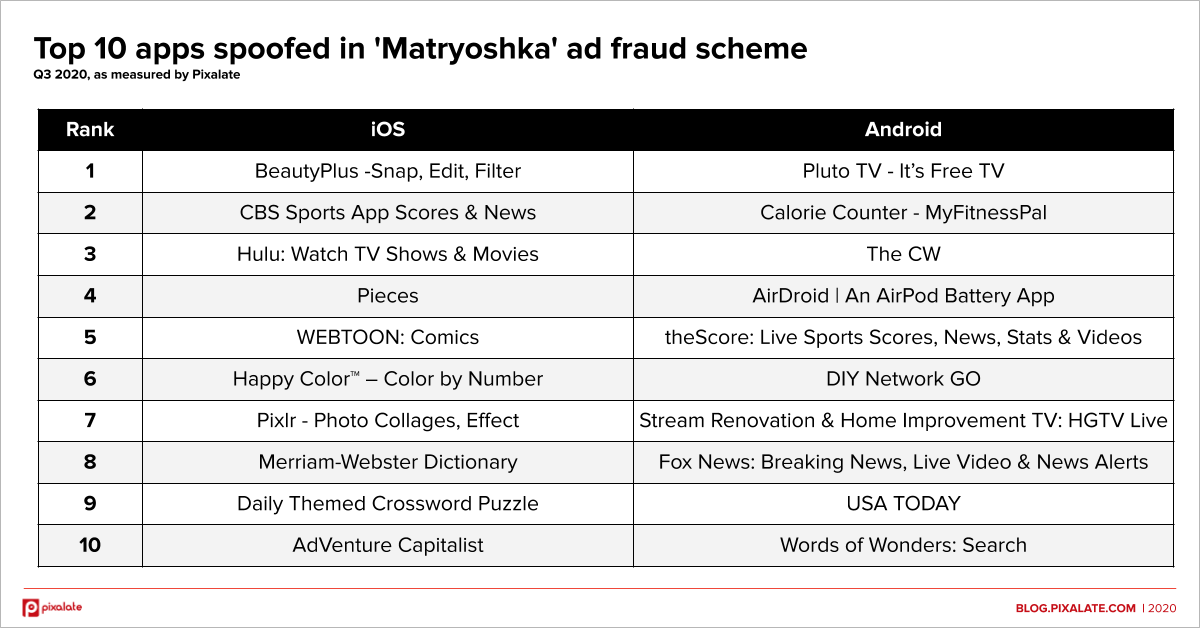 We’ve also shared the top 50 apps spoofed in the ‘Matryoshka’ ad fraud scheme on each device type, including bundle ID and app identifiers.

As defined by the Media Rating Council (MRC), the specific Sophisticated Invalid Traffic (SIVT) types identified in this scheme include elements of app misrepresentation (i.e. “spoofing”), manipulated activity, falsified measurement events, and malware that conducts deceptive actions. Similarly, such traffic is classified as manipulated behavior and false representation, as defined by the Trustworthy Accountability Group (TAG).

Whether or not app store policy violations have occurred is ultimately at the discretion of Google and Apple, respectively. Additionally, Pixalate is not seeking to assert or assign culpability via this disclosure. However, certain parts of Google’s Google Play Developer Distribution Agreement and Apple’s App Store Review Guidelines may be pertinent to any such inquiry, including:

Additionally, the Google Play Store Policy Center — Ads section may contain information relevant to any such inquiry, including:

* Based on programmatic ads sold, as measured by Pixalate, Q3 2020.

Pixalate is neither asserting nor assigning culpability with our research and insights. Is it our belief that our readers may be interested in learning more about ad fraud, particularly on iOS devices, as most of the mobile app ad fraud schemes uncovered to date have focused exclusively on Android.

These Stories on Mobile

Interview: PubMatic on the evolution of mobile in-app advertising