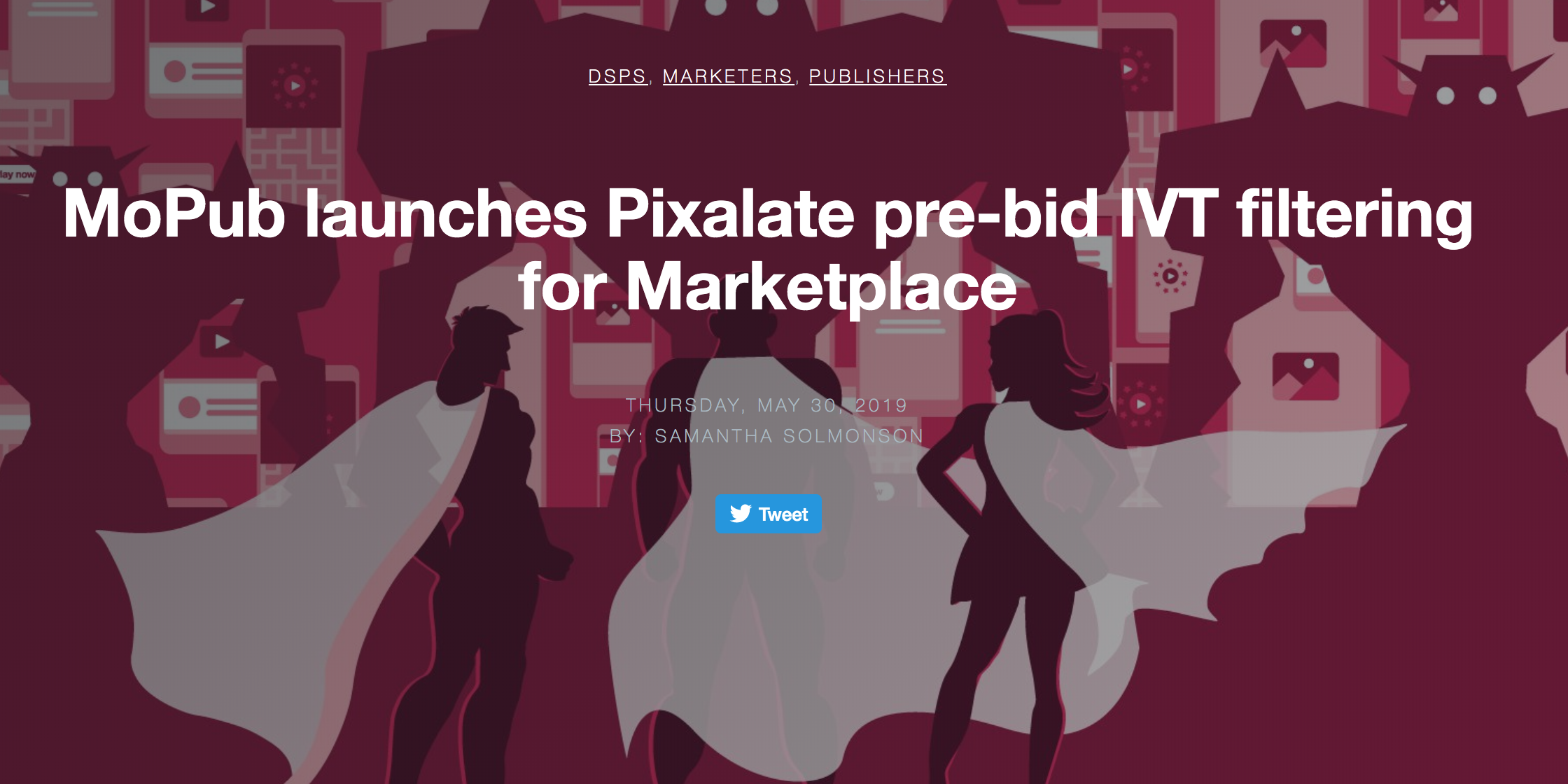 We are excited to bring you more information about the expanded partnership announcement. The below is a copy of MoPub's original announcement, authored by Samantha Solmonson, Senior Product Marketing Manager at Twitter.

In January of this year, we announced post-bid traffic quality partnerships with Pixalate and DoubleVerify, two of the leading MRC-accredited vendors in invalid traffic (IVT) management. Today, we are happy to announce that we’ve expanded our partnership with Pixalate to include pre-bid IVT filtering. This newly-launched solution marks another milestone in our mission of eliminating IVT from MoPub Marketplace and maximizing the quality of in-app mobile traffic for our demand-side partners and their advertisers.

MoPub is directly integrated with Pixalate’s pre-bid IVT blocking solution, which helps us to proactively identify and filter out invalid ad calls in real-time from our Marketplace.

Any ad calls deemed invalid as per the MRC definition of invalid traffic are immediately dropped from the exchange.  However, publishers may still have the opportunity to monetize these ad calls through other non-exchange mediated ad groups, such as ad networks.

“Our pre-bid Blocking works as a proactive anti-ad fraud solution for customers,” said Jalal Nasir, CEO of Pixalate. “You can’t play whack-a-mole against scammers and expect to effectively reduce risk. We’re thrilled to bring platform-wide protection to MoPub for a more comprehensive strategy against ad fraud.”

A cleaner exchange benefits all participants, including both publishers and DSPs.  In particular, by filtering IVT before it enters the Marketplace, we anticipate an overall increase in Marketplace impression quality, which should lead to more trusted performance, stronger demand, and ultimately, healthier returns for our supply partners.  Pre-bid IVT filtering will:

Pre-bid IVT filtering is one of several steps we currently take to help eliminate ad fraud from MoPub Marketplace.  For instance, when publishers are onboarded to MoPub Marketplace, we fully vet their apps’ traffic quality through manual checks, as well as with data-driven analysis in Pixalate’s Media Ratings Terminal.  We also run post-bid IVT detection through our direct integrations with Pixalate and DoubleVerify and action against publishers who violate our exchange policies, a thorough and resource-intensive endeavor that is supported at scale by Twitter’s global Policy Operations team.

For an overview of our end-to-end IVT management solutions, please see Eliminating Invalid Traffic (“IVT”) from MoPub Marketplace; and for our publisher best practices, please see Detecting & preventing in-app invalid traffic (“IVT”). Finally, we encourage all of our partners to familiarize themselves with the technical requirements of our legal policies, which can be found in detail at: https://www.mopub.com/legal/supply-side-policy/.

Want to learn more about Pixalate's products, and see how we can help you predict and prevent ad fraud? Schedule a demo today!