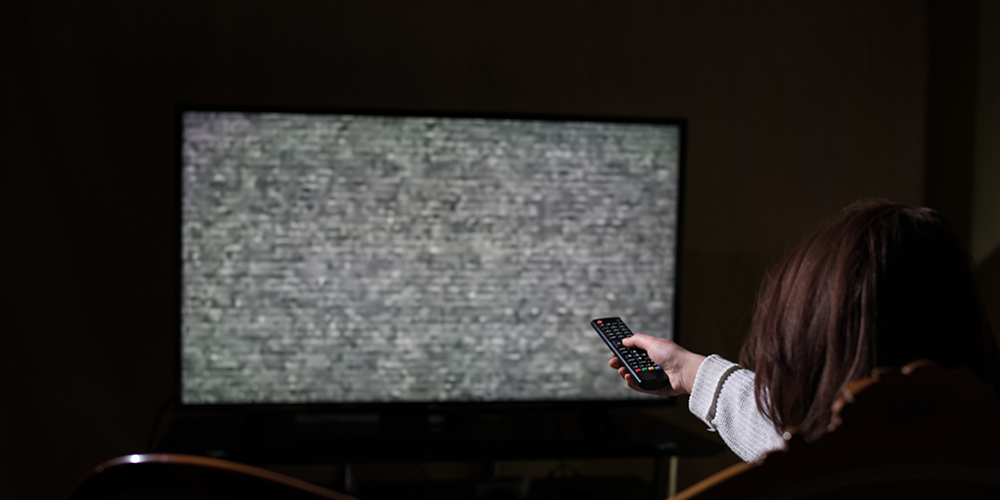 Ad Age: Brands don’t have to be 'stymied' by ad fraud in Connected TV (CTV)

“Connected TVs are susceptible to fraud, but there also are ways for brands to protect themselves,” wrote Ad Age’s Garett Sloane. “The main way to avoid the fraud trap[s] are basic: Know your ad tech channels, know the partners that make ad inventory available in automated exchanges, and, as always, trust but verify."

The state of programmatic CTV ad fraud in 2020

The IAB Tech Lab’s VP of Programmatic Ads and Partnerships, Amit Shetty, told Ad Age that ad fraud is most problematic in open auction ecosystems. “If we really want this space to grow we will need to make sure we control that,” Shetty said, per Ad Age.

Pixalate’s 2020 CTV Ad Supply Trends Report found that programmatic CTV ad fraud rates were between 19% and 24% throughout 2020. The report is based on Pixalate’s datasets, which consist predominantly of open auction programmatic traffic sources. 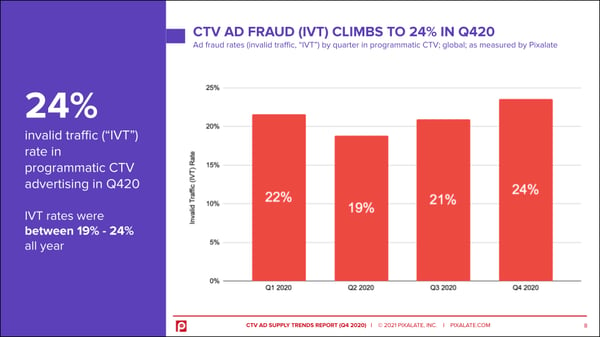 The Ad Age article dives into one of the critical technical reasons CTV is susceptible to ad fraud: The widespread use of Server-Side Ad Insertion (SSAI).

SSAI is a commonly used method of programmatic ad delivery in which ad content and video content are “stitched” together to create a more seamless user experience. SSAI is typically done via proxy servers in data centers.

“When it’s working well, viewers will notice that the commercials appear almost as quickly as any other TV experience,” wrote Ad Age. “It’s particularly helpful when an app has multiple commercials in an ad break; the server can ‘stitch’ together the whole ad pod.” 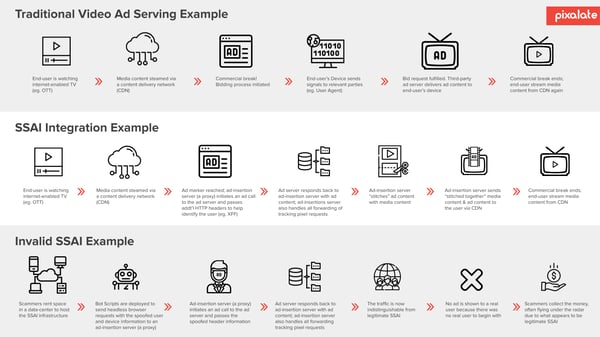 However, scammers have taken advantage of the fact that a significant portion of programmatic CTV advertising runs through proxy servers.

And because SSAI is so common in programmatic CTV — about 40% of programmatic CTV is transacted via SSAI, according to Pixalate’s data — it’s easier for fraudsters to blend in with the crowd.

“Always work with supply partners that select reputable ‘server side ad insertion’ vendors that support transparency standards,” such as VAST 4.x, suggested Angelos Lazaris, Chief Data Scientist at Pixalate, to Ad Age readers. Lazaris added: “Traffic sources from a supply source for a given publisher should follow an all-or-nothing approach. Either all or none of the traffic from a specific supply source and publisher combination should be ‘server side ad insertion.’”

Ad Age has more on other risk factors in CTV

Read the full Ad Age article for a deeper dive on other risks that CTV advertisers need to be on the lookout for — as well as more tips on how to mitigate risk best when seeking to reach CTV audiences.

Want more insight into programmatic CTV ad trends in 2020, and what it means for 2021? Join Pixalate and XUMO for a webinar on Thursday, April 8, at 1:00 pm EDT as we go in-depth on the data in Pixalate’s 2020 Connected TV (CTV) Ad Supply Trends Report. Reserve your spot today.

These Stories on OTT