Our run through Q1 2017 programmatic ad fraud rates has zeroed in on mobile trends over the past week, and we’re continuing the in-depth mobile analysis today with a look at mobile ad fraud rates for some of the most common ad unit sizes both in-app and on the web across smartphones and tablets.

37% of 320x50 ad units are fraudulent within smartphone apps 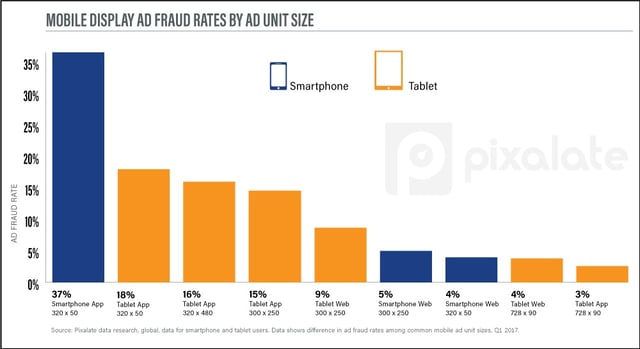 Our previous blog post noted that smartphone app ads are fraudulent more often than smartphone web ads, so it’s not surprising to see this trend ring true when looking at specific ad unit sizes as well.

However — in contrast to the above statement — our previous findings also noted that, overall, tablet app and web ads are fraudulent at roughly the same rate (12%). But when breaking it down by specific ad units, we see that common tablet app ad unit sizes are utilized most often by fraudsters. 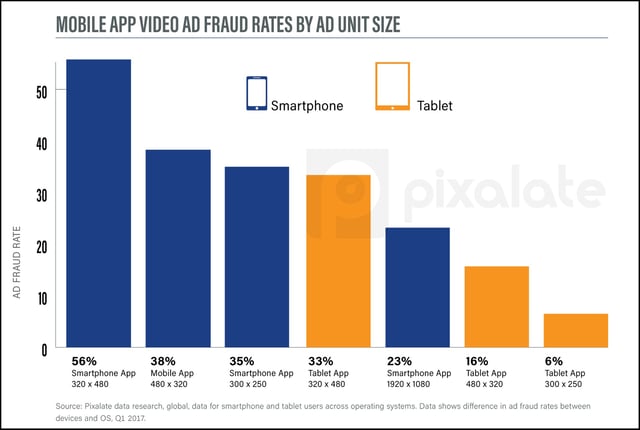 Video ad fraud rates are typically higher than display ad fraud rates on mobile devices in general, and this is readily apparent when we look at the individual ad units most commonly affected by ad fraud. Four of the most common mobile video app ad unit sizes (320x480, 480x320, and 300x250 for smartphones, and 320x480 for tablets) are fraudulent over one-third of the time.