New York Times: 'They Know What You Watched Last Night'

In the News OTT

"A spate of streaming services are on their way from major tech and entertainment companies, promising viewers a trove of binge-worthy new shows and movies," wrote the New York Times in a recent piece examining the burgeoning Connected TV (CTV) and over-the-top (OTT) streaming space.

"There’s something for advertisers, too: your personal data," the NYT added.

The streaming universe: 'A breeding ground for fraudsters' 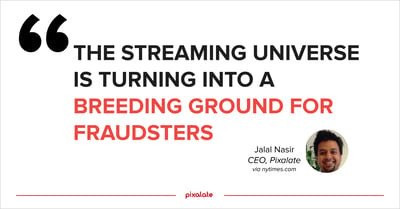 "The streaming universe is turning into 'a breeding ground for fraudsters and others who might abuse the system,'" Jalal Nasir, Pixalate CEO, said to the NYT.

"'There’s a huge, huge disconnect, because the data collection standards are very loosey-goosey,' Mr. Nasir said. 'There’s so much money involved, so many players in the industry, but also a lack of standardization and education for regulators, consumers and advertisers.'”

Read the whole article in The New York Times, which deep-dives into the shift in advertising toward streaming TV and its impact on consumer privacy and data regulation.