The Pixalate Publisher Trust Index is the ad industry’s first quality ranking system for mobile and Connected TV (CTV) apps. In this blog, you will find insights about the top 10 Apple App Store mobile apps with the highest overall quality for programmatic advertisers in April 2021 for North America.

Quality is determined based on Pixalate’s analysis of a variety of metrics, including ad fraud, popularity, brand safety, and more. Learn about our methodology here and create a free account to see the full Pixalate Top 100™ rankings.

Pixalate rated over 125,000 apps available in the Apple App Store in metrics including invalid traffic (IVT), brand safety, popularity, viewability, and more. Here are the top 10 performers in North America, from April 2021: 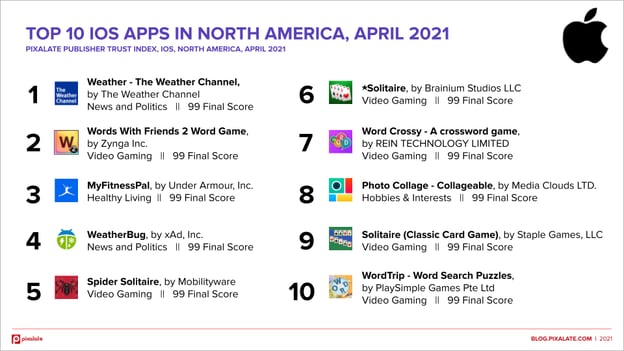 Weather - The Weather Channel gained the first spot in the Pixalate Top 100™ for Apple Apps Store in North America by excellent performance in all measured metrics. However, all the top 10 obtained high scores in all categories and competition for the top position was close.

All apps from the top 10 achieved a score higher than 80 in all measured metrics. Moreover, they all obtained the highest possible score (99) in the brand safety metric.

In addition to the apps in the top 10 with the highest overall quality, there are other high-quality apps that can be found a bit further down in the top 100 rankings. For example, there are 10 apps outside the top 10 that achieved a score higher than 80 in all measured categories.

For example, Angry Birds 2 achieved an "A" grade in all metrics, as did InShot - Video Editor.

Pixalate’s Publisher Trust Index is a global approach to quality measurement and monthly rankings of the world’s mobile and Connected TV (CTV) apps, designed to bring unprecedented transparency to the programmatic advertising ecosystem.