Top 10 Apps on Roku for Advertising in North America, April 2021

The Pixalate Publisher Trust Index is the ad industry’s first quality ranking system for mobile and Connected TV (CTV) apps. In this blog, you will find insights about the top 10 Roku apps with the highest overall ad quality in April 2021 for North America.

Quality is determined based on Pixalate’s analysis of a variety of metrics, including ad fraud, popularity, user engagement, and more. Learn about our methodology here and create a free account to see the full Pixalate Top 100™ rankings.

Roku’s app ecosystem is significant for ad buyers looking to increase budgets in this rapidly growing sector, as the lion’s share of CTV programmatic advertising activity occurs on Roku apps. In general, the Pixalate Top 100™ index for Roku has a broad range of apps, allowing advertisers to reach a diversified range of potential customers.

Pixalate rated more than 3,500 apps in the Roku Channel Store in metrics including invalid traffic (IVT), user engagement, popularity, and ad density. Here are the top 10 performers in North America from April 2021: 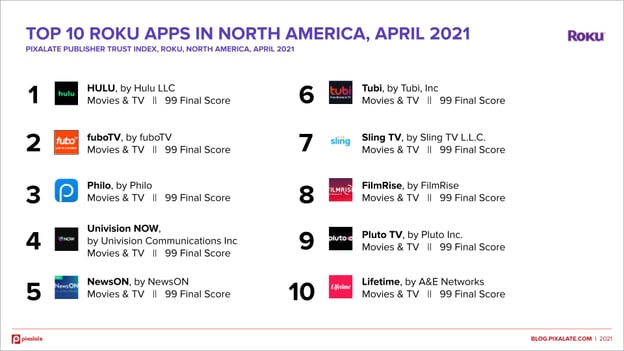 Hulu has earned the top spot in the first ranking by superior quality in all categories. But it’s not the only app worth consideration. Among the top 10, six apps gained the highest possible grade across all metrics, including:

In April 2021, the top 10 rankings were dominated by TV & Movies channels. However, in the top 100, there was a strong representation of news, sports, kids, and music platforms.

The Pixalate Top 100™ can be utilized to identify apps that are strong in quality-based metrics that go beyond traditional reach figures. For example, over one-in-four (26) apps in The Pixalate Top 100™ for Roku obtained the highest grade in the user engagement category in April 2021. By looking at lower positions in the ranking, advertisers may be able to identify traffic sources to target more specific or engaged audiences.

Pixalate’s Publisher Trust Index is a global approach to quality measurement and monthly rankings of the world’s mobile and Connected TV (CTV) apps, designed to bring unprecedented transparency to the programmatic advertising ecosystem.