2. Criteo partners with Pixalate to provide additional protection for advertisers 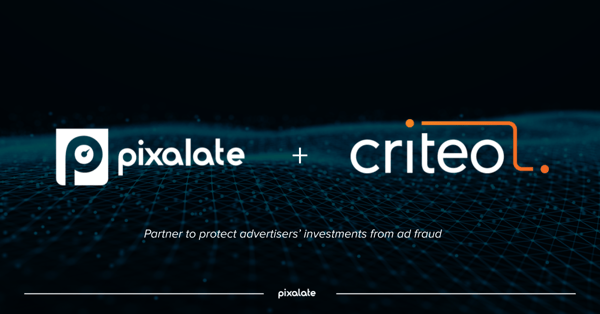 Pixalate this week announced a partnership with Criteo, the advertising platform for the open Internet. "Through this partnership, Pixalate will supplement Criteo’s existing IVT detection engine, helping to ensure its advertisers that the media bought on their behalf is viewed by real human users with genuine intent," the release reads.

“We are thrilled to announce our partnership with Criteo, a leading multi-national public company,” stated Jalal Nasir, CEO of Pixalate. “By implementing our end-to-end anti-fraud solution, from media planning to pre-bid fraud protection, Criteo is demonstrating its commitment to the fight against ad fraud.”

Pixalate sat down with Karim Rayes, Chief Product Officer at RhythmOne — a cross-device supply-side platform (SSP) — to discuss ad fraud and steps that can be taken to achieve a clean programmatic supply chain.

Read our blog for more info, or watch the video here.

"After a slowish start, App.ads.txt adoption is surging, but there’s still an enormous longtail of apps that shrug their collective shoulders at the industry spec designed to cut down on app ad fraud," reported AdExchanger. "Fraud detection company Pixalate, which tracks Ads.txt and App-ads.txt compliance, found that use of App-ads.txt increased 177% between Q1 and Q2 and then hockeysticked 1,222% percent between the second quarter and now."

"Connected TV ad spending is increasing significantly, but it still faces issues when it comes to the fragmentation of inventory, lack of standardized measurements, frequency capping and ad fraud," reported eMarketer.

"[One] issue with connected TV and OTT advertising is that it can be prone to ad fraud," eMarketer noted. "While connected TV and OTT inventory demand is very strong, the supply of impressions is limited. This has created an opportunity for fraudsters to trick advertisers into buying inventory that does not really exist.