The biggest vulnerability in the OTT/CTV industry is the widespread use of Server-Side Ad Insertion (SSAI). According to Pixalate data from Q2 2019, over one-third (38%) of all programmatic OTT/CTV ad transactions are delivered via SSAI.

However, due to security gaps that exist in SSAI, “ad stitching” is actually a hidden driver of ad fraud in Connected TV/OTT.

This post demystifies OTT/CTV ad fraud by debunking common myths about SSAI, which is also referred to as ad stitching.

Want to learn more about how fraudsters can take advantage of SSAI security gaps? Register for our upcoming webinar on July 11 at 1pm ET hear from OTT/CTV industry experts. 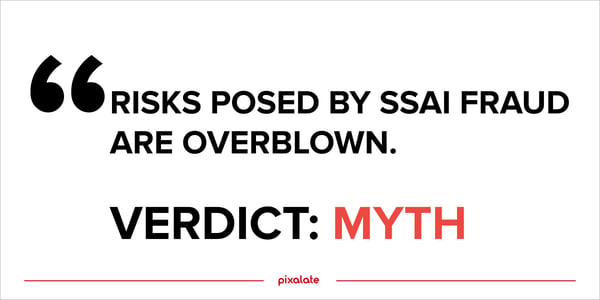 Based upon Pixalate’s own analysis, more than one-third (38%) of all over-the-top and connected television (“OTT/CTV”) programmatic ad transactions purport to use SSAI.

Pixalate deems 26% of those transactions invalid, making SSAI one of the riskiest channels in terms of ad fraud rates, on par with the ad fraud risks posed by mobile in-app video advertising. 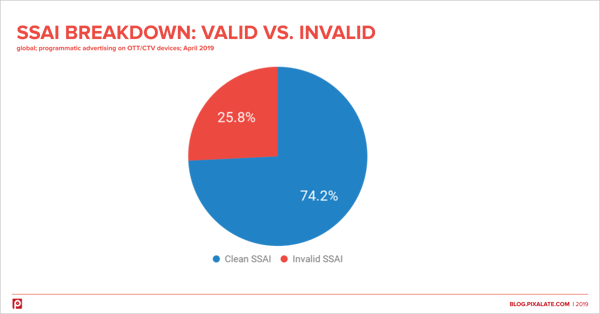 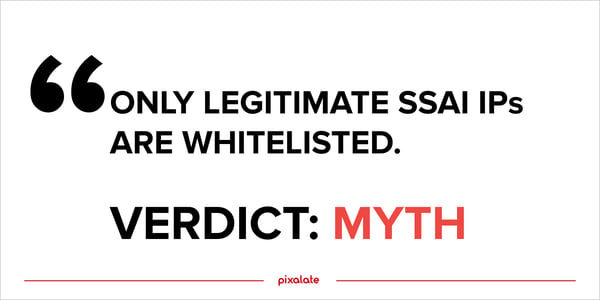 Unfortunately, blanket approaches enable exploitation of SSAI integrations by scammers. Dedicated sophisticated invalid traffic (“SIVT”) detection and filtration vendors are a must in the context of OTT/CTV and SSAI.

Myth #3: SSAI traffic is not as susceptible to exploitation by scammers 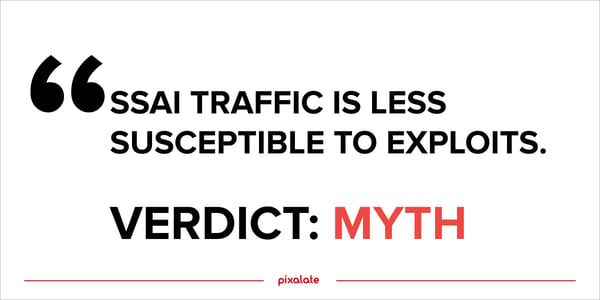 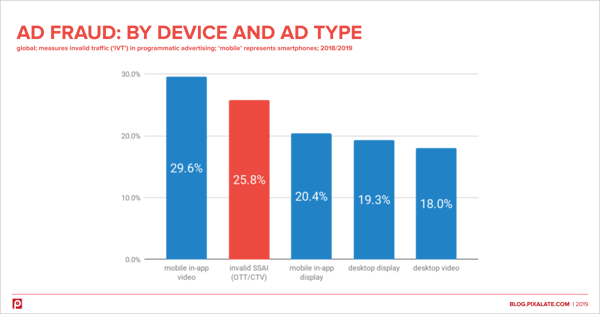 Myth #4: You can deterministically identify valid vs. invalid SSAI inventory 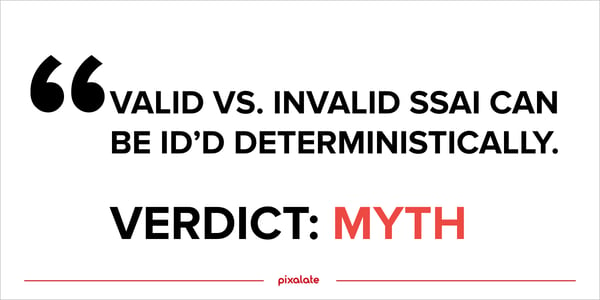 There is no deterministic way at present to identify valid vs. invalid SSAI inventory.

However, for the past several years Pixalate has been making significant investments to become the leading innovator in SSAI fraud detection. Leveraging our early start and unwavering commitment, we have developed and refined algorithms that estimate the reputation of tens of thousands of purported SSAI servers.

We have also implemented IPv4 and IPv6 dual-stack recognition as part of our Proxy Reputation System, as more and more OTT/CTV devices are connecting to the internet via IPv6 infrastructure.

In addition to providing Pixalate with the ability to render well-founded opinions regarding valid vs. invalid proxies, this data-driven analysis also helps Pixalate build blocklists for invalid OTT/CTV devices, IPv6 and IPv4 users, and proxies. 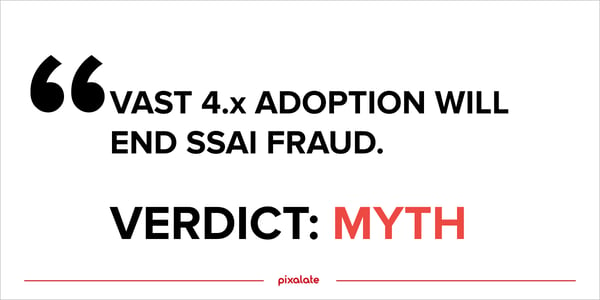 Although the methodology behind our Proxy Reputation System leverages, and is in accord with, the latest VAST 4.0, VAST 4.1 and VAST 4.2 guidelines — and Pixalate captures all associated header information — Pixalate also utilizes a large variety of additional traffic signals (more than 30 in total) to render our opinions regarding the validity of purported SSAI transactions.

Pixalate nonetheless applauds the IAB’s and MRC’s push towards transparency and the industry standards for SSAI. One reason the OTT/CTV programmatic advertising ecosystem is so susceptible to fraud is that it is too opaque.

Only 26% of all instances of valid SSAI are “transparent,” which Pixalate defines as an impression where the purported SSAI proxy passes at least an X-Device-User-Agent header. 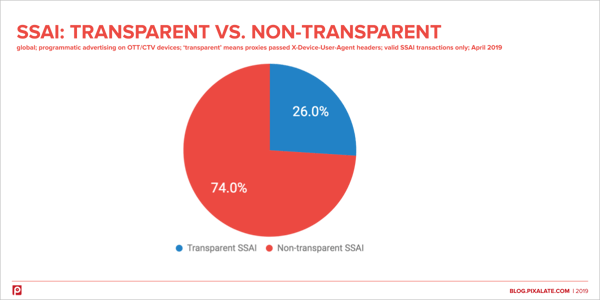 Of course, ideally, we would also receive X-Device-IP (in accordance with VAST 4.1), as well as additional HTTP headers proposed for more transparency by the IAB (e.g., X-Device-Referer and X-Device-Accept-Language).

Simply put, one of the most important determining factors in catching fraudsters is to have access to as much information in the header as possible. Through fully-transparent views into the OTT/CTV ad ecosystem, Pixalate is able to identify and catalog proxies and their behaviors at scale, which enables us to create and optimize our Proxy Reputation System to automatically detect invalid SSAI.

Thus, despite our above-noted proprietary signals and years of innovation, our refined and sophisticated process would not be as successful at detecting fraud in a completely opaque ecosystem.

Pixalate promotes transparency across our solutions, surfacing our SSAI analysis to our clients through 12 distinct, SSAI-specific metrics. These and other metrics are combined with additional SSAI data analysis to inform all of our OTT/CTV-optimized, cross-channel product offerings. 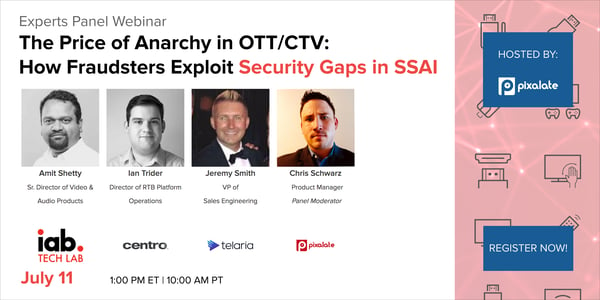 Pixalate, the first and currently only company accredited by the MRC for sophisticated invalid traffic (SIVT) detection and filtration in OTT/CTV, has gathered industry experts for a webinar on the use of Server-Side Ad Insertion (SSAI) in OTT/CTV advertising.