Ads.txt lowers ad fraud 22%, but can’t keep up with the growing threat

Pixalate last week released the Q3 2018 Ads.txt Trends Report, and we reviewed whether or not ads.txt has a positive impact on the overall fight against ad fraud — and to what extent.

The IAB Tech Lab’s ads.txt program aims to reduce counterfeit inventory (e.g. domain spoofing), which is one specific type of invalid traffic (IVT). Pixalate monitors over 35 unique types of IVT — of which domain spoofing is just one of them — but it is a problematic fraud tactic that can wreak havoc on digital ad campaigns if left unchecked.

That’s why ads.txt is such an important program. We conducted this same study in Q2 2018 and found that sites with ads.txt had a 10% lower ad fraud rate compared to sites without ads.txt.

Here’s what our latest ads.txt update shows on the ad fraud front.

Domains with ads.txt have a 22% lower ad fraud rates

As noted in our Q3 2018 Ads.txt Trends Report, and as reported by MediaPost, domains with ads.txt have a 22% lower ad fraud rate compared to those without ads.txt. 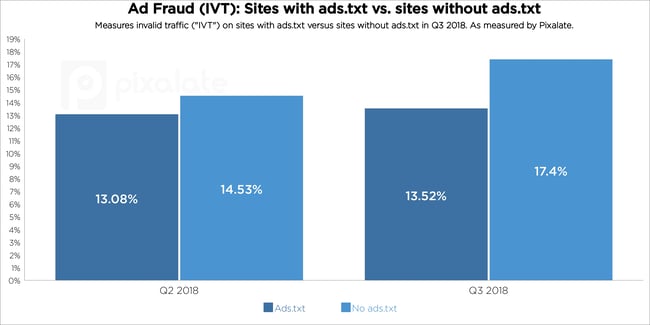 Let’s expand on those two points.

Ads.txt is doing its part to weed out (some) ad fraud...

Of course, these numbers also reveal that, despite the crystal-clear advantage of ads.txt, double-digit ad fraud rates continue to persist. Read our blog to learn why that’s the case.

…but fraudulent traffic continues to grow

As the above chart also shows, invalid traffic is still on the rise. And that’s true even on sites with ads.txt.

That’s because, as noted above, ads.txt doesn’t prevent all types of invalid traffic; its primary goal is to stamp out spoofing, which is just one of the 35+ types tracked by Pixalate.

The data shows that invalid traffic increased significantly more quarter-over-quarter on sites without ads.txt — yet another reason to get on board with the ads.txt program — but fraudsters still found a way to increase their profit across the board.

The rise in invalid traffic in Q3 could have been a precursor for what to expect in Q4. Fraudsters always follow the money, and as we know, with the holiday season comes a bump in digital ad spend.

You can download a full copy of Pixalate’s Q3 2018 Ads.txt Trends Report below: